Adrianna Riggins, but as her friends call her Ade, was born in a quaint town of Fairhope, Alabama on the Gulf Coast. She currently attends Auburn University, where she is a senior studying Apparel Merchandising. From a young age she had a passion for photography and fashion. If you ask her friends to describe Riggins in one word, they would all say the same thing, that she is the ultimate “girl-boss.” Riggins didn’t achieve being a girl-bossout of nowhere though, she worked hard to gain that title. 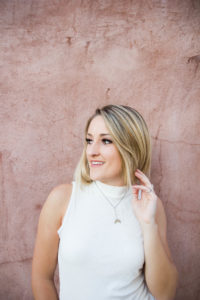 Riggins always loved photography, but her skills startedto shine when she started at Auburn. She did photography and videography for her sorority, and that’s when people really saw how talented she was. More and more people were asking Riggins to take their senior photos, personal photos and so on. That’s when she decided to turn her passion into a business.

Riggins, a motivated self-starter, started “Adrianna Riggins Photography” a small, one-person business that has blossomed into something bigger then she could ever have imagined. Riggins is now the “it” girl at Auburn for everything photography. Now she does everything from graduation pictures, personal pictures, engagement pictures, wedding pictures and even photography for some of the downtown Auburn Boutiques. “I love photography because love seeing peoples reactions when they see their photos,” said Riggins. Riggins still finds a way to make photography less of a job, and more of a hobby. Riggins loves taking photos on her disposable camera, “I carry a disposable camera everywhere I go for a month or two and then get the pictures developed,” said Riggins. Riggins has found the perfect balance for being able to keep photography as her business and hobby.

We can’t talk about Riggins without talking about fashion, her other passion. When it comes to fashion, she beats to her own drum, wearing whatever she wants, whenever she wants. The summer going into her senior year, Riggins was offered an unbelievable internship in Los Angeles at a fashion company called “Sage the Label.” This was the perfect job for her in the perfect place. “Expression through clothes has become my way of feeling good about myself. I always enjoy throwing together an outfit that wouldn’t necessarily go together. I still surprise myself sometimes at how well it works out,” said Riggins.

Riggins, at only 21, has been able to find her passion at such a young age. She is excited to keep taking her passions and further purse them as a career, which no one has any doubts that she will be extremely successful at, after all, she is a girl-boss.